Hello everyone and happy September!

I know I say this every time but gosh, where has the time gone? How are we 3/4 into the year now?

Here is my wrap-up for July and August – I’ve combined the two, which may not have been the best idea since I read 9 books in July, and another 9 in August, so this wrap-up is just a tad long.

First, some announcements. If you’ve been here a while, you can likely see I’ve made a few changes to the blog! I’ve been wanting to change my headers/banner for a while, and I tried canva for the first time (before giving up and migrating back to photoshop) and I’m really happy with the way the banner and post headers have turned out.

I’m also experimenting with changing the layout of my posts – nothing major, I just want to make them more readable and concise, so I’m going to try to include headings and contents tables to make things easier.

I appreciate any feedback on what you think of the changes and if anything needs to be improved!

Without further ado, here is my wrap up for the last two months. 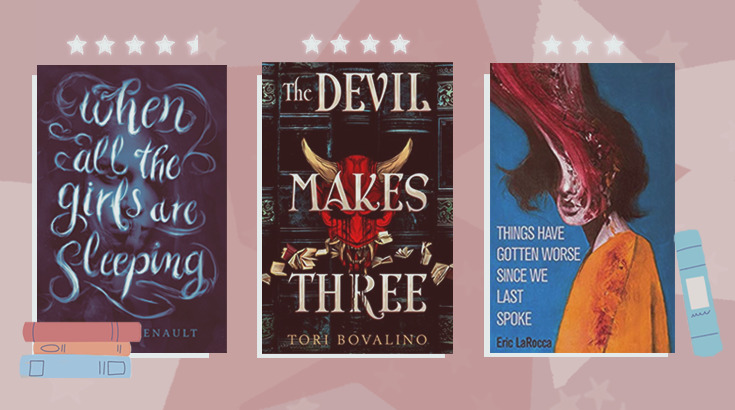 When All the Girls Are Sleeping by Emily Arsenault
Mysteries set in a boarding school? I was already hooked from the very beginning. I was so surprised by how much I loved this novel, to the point I was sad when I was nearing the end.

The Devil Makes Three by Tori Bovalino
This is one I was so glad to get the ARC for because it was such a thrilling ride; I loved the horror and the dark academia and the bit of magic in the novel. The main characters were really wonderful too, which is sometimes a rare feat in horror novels that focus more on atmosphere and less on character development. Look out for my full review for this next week!

Things Have Gotten Worse Since We Last Spoke by Eric LaRocca
I randomly picked up this book after perusing scribd for short novellas. I did not expect the sheer chaos and horror that this short little novella contained. Overall, it was a really interesting horror novel that kept me on the edge of my seat, but it’s not something I’d recommend for the faint-hearted.

The Dead and the Dark by Courtney Gould
This is another I was so happy when I got approved for this ARC – a sapphic thriller! I definitely enjoyed the mystery and elements of the book and the romance; even if you’re not a fan of thriller I think it’s worth a read. 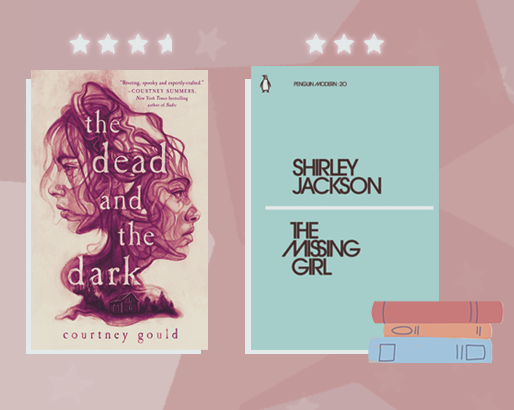 The Missing Girl by Shirley Jackson
This is actually a collection of three of Jackson’s short stories: The Missing Girl, Journey with a Lady, and Nightmare. Of the three of them, I enjoyed The Missing Girl the most because of how it still ends with questions unanswered. They made for some quick reads and I have always admired how Jackson is able to create suspense in such short stories. 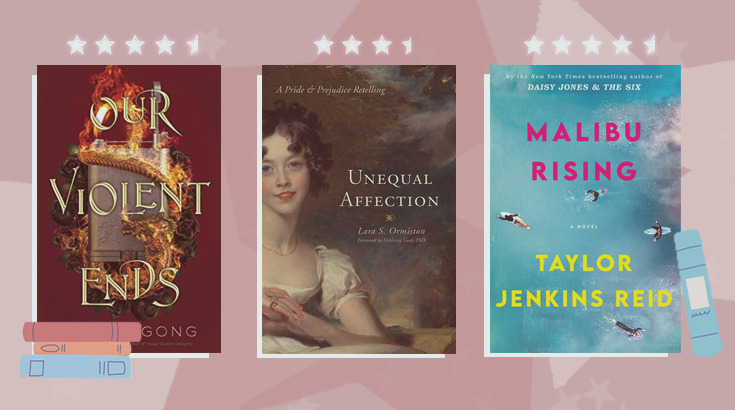 Our Violent Ends by Chloe Gong
I’m not sure how to describe my thoughts on this other than aaaaaa! This was a fantastic conclusion to the duology, and such a satisfying ending. Expect my full review closer to the publication date!

Unequal Affections by Lara S. Ormiston
Pride and Prejudice is my absolute favourite classic, so I was so excited to revisit the characters in this retelling! This takes place just after Darcy’s initial proposal, but this time Elizabeth considers the proposal some more. It was an interesting read and just gave me so much comfort to see my favourite characters again.

Malibu Rising by Taylor Jenkins Reid
This was a buddy read with my lovely friend Cossette. I went in with high expectations for and boy did it meet it and more. I didn’t expect to really connect with all the main characters – the wonderful Riva siblings – but I adored all of them (especially Nina) and I loved the emphasis on their family and sibling bonds. It was chaotic and fun and really tugged at my heartstrings. 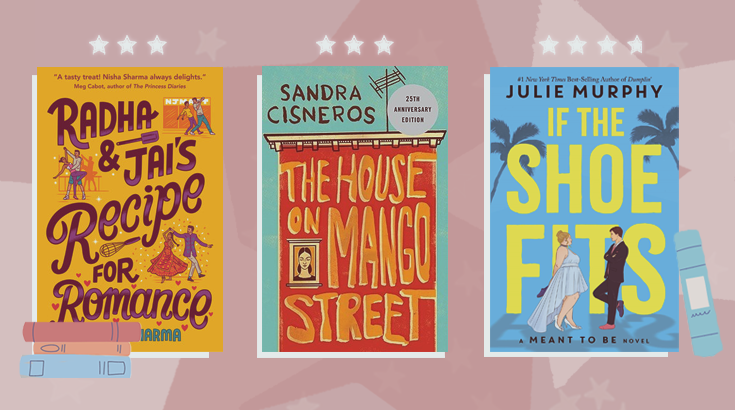 Radha & Jai’s Recipe for Romance by Nisha Sharma
This was overall it was a cute read! I wasn’t into it as much as I hoped, but I also read this when I wasn’t in the mood for a romance. I really appreciated the mental health and desi representation in this, it was very cute.

The House on Mango Street by Sandra Cisneros
I picked this up at random and it was a really enlightening read about a girl living in poverty and her life living on Mango Street. It’s essentially a novel of vignettes of her life there and her neighbours, and knowing it’s somewhat autobiographical made it so much more interesting.

If The Shoe Fits by Julie Murphy
Julie Murphy has my whole heart. Going into this, I knew I was going to love it – and it was such a cute and flirty book. I read this when I needed a pick-me-up and it was a great choice because it was such a fun plot (Cinderella meets the Bachelor!!) and full of such great fat-positive representation as well as wonderful female friendships and family relationships and a sweet romance too.

That Way Madness Lies by various authors, edited by Dahlia Adler
This is a wonderful collection of short retellings of Shakespeare’s works. I’ve always been a fan of Shakespeare’s plays and reimaginings so I was so glad to see diverse takes of the plays. My personal favourites were Taming of the Soul Mate, King of the Fairies, and I Bleed. 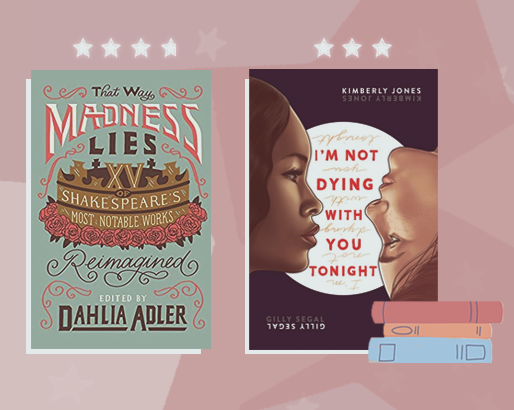 I’m Not Dying with You Tonight by Kimberly Jones & Gilly Segal
I decided to check out the audiobook for this after seeing Aarushi mention it. I enjoyed the different narrators for the main characters, and how it delved into implicit biases and police brutality. The novel was quite short so there wasn’t as much character development as I had hoped, and I didn’t really warm up to the characters, but it did touch on some really good messages in a short span of time. 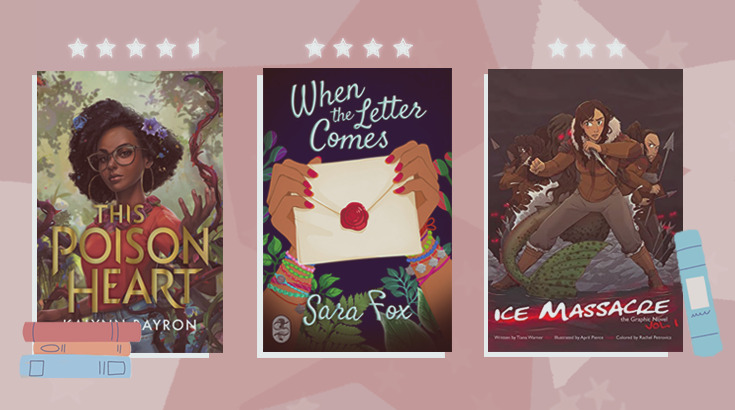 This Poison Heart by Kalynn Bayron
I buddy read this with my friend Bie and it was so fun reading it together and discussing it!! It’s urban fantasy and mystery and sapphic, and overall so interesting

When the Letter Comes by Sara Fox
This was a very cute and moving short story following a trans girl who unfortunately finds out that she didn’t get into magic school, but her sister did. It’s a story of growing up and becoming more comfortable in your own skin and about sister bonds as well. If you’re looking for a quick fun read, I would definitely recommend!

Ice Massacre: Graphic Novel by Tiana Warner, illustrated by April Pierce & Rachel Petrovicz
It was so lovely to see the illustrated version of Ice Massacre. The novel was good, but seeing the action in the graphic novel elevated my enjoy the story even more. I mean, bloodthirsty mermaids and friends to enemies to potential lovers? Sign me up! I can’t wait to see the graphic novel depictions of the rest of the story.

Capsule by Mel Torrefranca
I was so happy to read this ARC because it’s been a while since I read something that was contemporary with sci-fi mixed in! This was a cool read, I really liked the sci-fi elements and how the characters were not your regular cookie cutter protagonists. 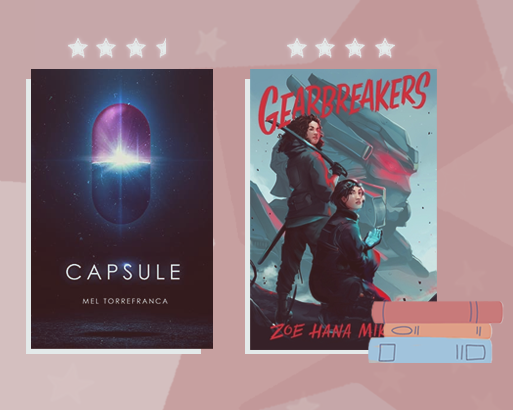 Gearbreakers by Zoe Hana Mikuta
As a huge fan of enemies to lovers stories and things involving mecha giants (my favourite film is Pacific Rim, after all) I was so excited for this book. I loved the action and the main characters and their slowly blossoming bond. I do wish there was more character development with the side characters to really add to that found family element to the book, and some more clearcut worldbuilding, but I still really loved it and am eagerly anticipating the sequel.

I’m still ahead on my goodreads challenge!! I’m hoping to reach 100 books by the end of october at the latest, but I do have a lot of other things planned for September, as I’m hoping to see a lot of my friends again, so who knows if I’ll reach my reading goal early.

I posted my September to-read list for theatreathon, and there are some other books I’m hoping to get to in September if I have the time.

I’ve also vaguely plotted out what posts I’ll be uploading in September and October. I might actually be posting more than once a week occasionally because I have so many ideas, it’s just the matter of finding the time to actually write and edit these posts. It makes me so excited to have this spark for blogging rekindled.

September also marks my 6 month anniversary of making this blog! Time has flown by. I think I’ve really learnt a lot from this little corner of the blogging community, and also heard about such a range of books to really expand my taste!

Thank you to everyone who’s been kind enough to follow, comment, like, or even just read one of my posts. It truly means so so much to me!!

Thank you for reading!
How was your August? What did you read?